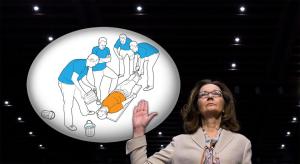 Washington, D.C., June 23, 2022 – Gina Haspel, 15 years before President Trump nominated her and the US Senate confirmed her as CIA director, personally oversaw the waterboarding of alleged USS Cole bomber Abd al-Rahim al-Nashiri at a black site prison in Thailand in 2002, according to recent testimony at a military tribunal at Guantanamo Bay, Cuba. Waterboarding has been recognized as a war crime since World War II, when the US prosecuted Japanese soldiers for, among other charges, torturing American POWs with waterboarding. The confirmation by James Mitchell, one of two CIA contract psychologists who designed the agency’s infamous torture program, builds on documentation previously obtained by the National Security Archive that Haspel authored or authorized memos on al-Nashiri’s torture while she was chief of base at the prison from October through December of 2002. The latest development was reported by Carol Rosenberg and Julian E. Barnes for the New York Times.

Mitchell’s testimony includes jarring details about al-Nashiri’s torture. He testified that al-Nashiri was of such slight build that team members were concerned he’d slip free of his Velcro restraints. Mitchell also stated that he only had a “general memory” of the torture inflicted on al-Nashiri, but that he “was probably slapped and had the back of his head slammed into a burlap-covered wall.”

The testimony is crucial because the video evidence of torture was destroyed – by Haspel’s own orders. In 2005 after learning that the Washington Post was running a story on the agency’s black site prisons, Haspel, who was then the chief of staff to National Clandestine Service head Jose Rodriguez, drafted a cable authorizing the destruction of 92 videos of al-Nashiri and Abu Zubaydah being tortured. Rodriguez approved the memo and justified the destruction by telling then-CIA Director Porter Goss and others that “the heat from destoying [sic] is nothing compared to what it would be if the tapes ever got into the public domain.”

The attempted cover-up helped prompt the Senate Select Committee on Intelligence (SSCI) to launch its investigation into the agency’s torture program (the investigation is a saga on its own, with the CIA illegally spying on its Senate overseers). As Rosenberg and Barnes note in their article, “The Senate Intelligence Committee study of the C.I.A. program, only a part of which is public, said that interrogators wanted to stop using ‘enhanced interrogation techniques’ on Mr. Nashiri because he was answering direct questions, but they were overruled by headquarters.”

The National Security Archive filed a Freedom of Information Act (FOIA) lawsuit for 12 of the key Haspel torture memos in April 2018 in anticipation of her Senate confirmation hearing to lead the agency. During the confirmation hearing, Senator Dianne Feinstein (D-CA) asked Ms. Haspel if she had overseen any torture of al-Nashiri, but Haspel declined to answer, saying the information was classified. The CIA still has not acknowledged Haspel’s role at the black site prison, despite public knowledge of her tenure there, asserting a state secrets privilege. During the recent proceedings Mitchell referred to Haspel only by the code name Z9A, signaling the court’s acceptance of the agency’s claim.

The ongoing al-Nashiri trial has not been short of fireworks. In a remarkable turn of events in 2019, the Court of Appeals for the D.C. Circuit “threw out every single pre-trial order issued over the past three-and-a-half years in the case of Abd Al-Rahim Hussein Muhammed Al-Nashiri.” The unanimous ruling came after the disclosure that the former trial judge presiding over the al-Nashiri case, Air Force Colonel Vance Spath, was applying for – and negotiating the terms of – a position with the Justice Department as an immigration court judge. Steve Vladeck has a superb write-up of this development in Just Security. Spath kept his job application secret from all parties, a gamble that could have called into question Spath’s partiality. Vladeck notes that a FOIA request filed by the Times’ Carol Rosenberg “turned up the very documents pertaining to Spath’s candidacy for a position as an immigration judge that the government had refused to disclose” and led to the ruling.

The case has also exposed serious problems with government classification practices. Later in 2019, Judge Col. Lanny J. Acosta Jr., the judge currently presiding over the case, cited a cable released to the National Security Archive as part of our Haspel lawsuit as evidence that the CIA’s handling of classified evidence at the detention camp’s national security trials has created unwarranted impediments for the defense. The current approach allows prosecutors, working with members of the intelligence community, to determine what portions of evidence the defense will need for trial. Prosecutors, as Rosenberg reported that year for the Times, “then redact portions of reports from the C.I.A. black sites or write summaries to substitute for the actual evidence.” To reach his determination, Judge Acosta compared a December 3, 2002, cable that was released to the Archive to a version of the same cable prosecutors provided al-Nashiri’s defense attorneys. Judge Acosta found “the comparison undermines any contention the redactions are narrowly tailored to a legitimate need to protect national security.”

The cable that was released to the Archive, which was authored under Haspel’s command, describes Day 17 of al-Nashiri’s torture session at a black site prison in Thailand. It states "HVTI [redacted, CIA contract psychologist James Mitchell] and linguist [redacted] strode, catlike, into the well-lit confines of the cell at 0902 hrs [redacted], deftly removed the subject’s black hood with a swipe, paused, and in a deep, measured voice said that subject – having ‘calmed down’ after his (staged) run-in with his hulking, heavily muscled guards the previous day – should reveal what subject had done to vex his guards to the point of rage." The cable provided to the defense was more heavily redacted, omitting charged words such as “catlike”, prompting Acosta to rule that some of the deletions “could fairly be characterized as self-serving and calculated to avoid embarrassment.”